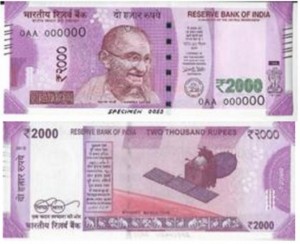 Ever since the demonetization decision was announced by the Indian Prime Minister Narendra Modi, several rumors have been on rounds over the social media spreading baseless facts and news. One such news which has been famous on the social networking app Whatsapp and micro-blogging site Twitter was the use of GPS-nano chips in the newly released Rs 2000 notes.

The news which is being widely shared by the social media says, that the Reserve bank of India will be introducing a new technology along with the Rs 2000 denomination, to track the precise location of the notes. The news post further explained that the said technology will be using ‘GPS-nano chips’ arranged into the currency notes, which will reflect the satellite signals in real time. It has been highlighted that the government will be using these signals to analyze the concentration of money in different parts of the country.

However, the ‘GPS-nano chip technology news’ which has been spreading like wildfire over the social media is completely baseless. The same has been confirmed by the Reserve Bank officials when the media personnel questioned them about it. “The new Rs 2000 note will feature a changed design and enhanced security while retaining all the security features of the now defunct Rs 1000 currency note”, the officials said.

Every Rs 2000 note will be printed with Mahatma Gandhi’s portrait on it and there will be special characters printed in braille to help the blind recognize the notes. In addition, the reverse side of the note will feature a representation of satellite as a tribute to the services of Indian space research organization to the nation.

Further, the Reserve Bank of India confirmed that the Rs 1000 notes will be back into the market after a few months with changed design.